Abstractions of the soul

Consciousness is universal – and its manifestations are infinite. 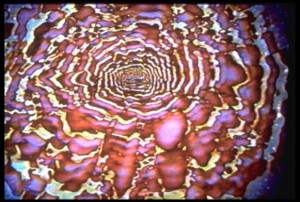 This rare art exhibition showcases the paintings of Paresh Chakraborty alongside some early video works of Peter Donebauer, revealing the mutual inspiration and influence between the two artists across cultures and mediums.

Paresh’s paintings belong directly within the western 20th century painting tradition, including the rise of abstraction, yet his paintings were often directly of Indian ragas or influenced by them. Peter Donebauer’s pioneering video work in the Seventies combined the performance of abstract colour videos in live performance with contemporary electronically based musicians from the western classical tradition. Paresh and Peter shared a deep connection with sound and music, either behind or within the works, and a conviction of the role of the spiritual domain in life and art. These themes underlie all the works on show, linked by the common use of abstract imagery. Both believe that the power of abstract imagery can act as a direct window to an inner consciousness.

Paresh and Peter met in 1975 via a mutual friend, Paul Marchant, and made a mutually inspirational friendship and link that continued until Paresh’s death recently in 2014. What is the subtle nature of a mutual artistic connection or influence? Their work was in different mediums and as a result

different in form – static painting and moving video seem worlds apart. Yet there was a very strong link that is hard to verbalise – it has qualities that are ineffable. The works on the walls will probably do a better job than words. So we may be left with an enigma for you the viewer to resolve – are the connections between the two obvious in the form and content works or deeply hidden?

Yet their root influences were very different: Paresh was strongly grounded in the intellectual, artistic and spiritual roots of the East – in Sanskrit, Yoga, Tantra, Meditation, the Ragas etc. Peter was more versed in the scientific method, but also deeply affected by some psychoanalysis, direct insight, Taoism, Zen Buddhism and a wide variety of music.

The form of their works is different: Paresh’s works are static paintings; Peter’s are the video records of (usually) live performances between at least two participants. Paresh’s are often deeply inspired by music, but are forms fixed in time, other than by that allowed by the viewer. The music in Peter’s work is integral to the form of the work and the pieces exist within the duration of time and often reflect processes from the natural world. Paresh’s often relate strongly to the emotional bases of the classical Indian ragas. Peter’s exist alongside a western musical tradition that evolved to include electronic instrumentation.

Paresh’s works for this show are a mixture of seven early and later paintings, with only approximate dates. Peter’s seven works are selected from two periods, firstly from the early Creation Cycle, 1973-1978, and then from the later Mandala Cycle, 1990-91. 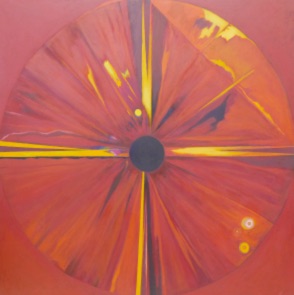