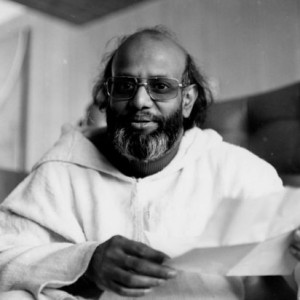 Paresh Chakraborty was the youngest son of a wealthy Brahmin family who owned collieries in Bengal. He learned Sanskrit at Benares Hindu University and studied in the lineage of Sri Ramakrishna at the Dakshineswar temple. This was followed by a monastic period at a seminary in Ladakh, including as part of that training a period as a wandering mendicant; at the monastery he was ordained as a priest and learned yoga. Perhaps picking up on from his family’s long patronage of classical Indian music, his personal journey switched to the arts, and in the late 1940’s he arrived at Santiniketan, founded by Rabindranath Tagore, where he studied painting under the tutelage of Nanda Lal Bose and sitar under Ravi Shankar. He then travelled to the UK where he studied painting at Edinburgh College of Art. He painted consistently for 40 years, but shunned the limelight and showed, gifted and sold paintings to a relatively small group of friends and acquaintances. His work has a rare authenticity in the modern world, hovering in a space beyond commercial and material concerns. He taught for many years in the influential and highly regarded fine art department at Wolverhampton College of Art, where he was an early influence on Anish Kapoor.