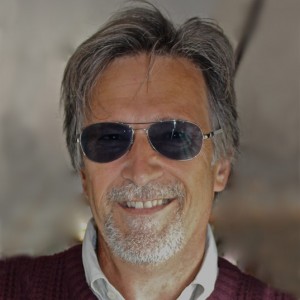 Chris Meigh-Andrews is a pioneering video artist and writer who has been making and exhibiting screen-based video and sculptural moving image installations since the mid 1970’s. He studied fine art at Goldsmiths and completed his PhD at the Royal College of Art in 2001 and has taught at numerous art schools and media departments in the UK. He has held a number of artist’s residencies in the UK and abroad and his site-specific and commissioned installations often incorporate renewable energy systems and establish direct relationships with the natural and constructed environment.

Meigh-Andrews has written extensively on the history and context of artists’ video. His book, A History of Video Art: the Development of Form and Function, (Berg, Oxford and New York, 2006 and Sangensha, Tokyo, 2013), provides an overview of the development of artists’ video since its inception. The second expanded edition of the book was published by Bloomsbury in Dec 2013. He is currently Emeritus Professor of Electronic & Digital Art at the University of Central Lancashire (Uclan) and Visiting Professor at the Centre for Moving Image Research in the Faculty of Arts, Creative Industries and Education at the University of the West of England (UWE).